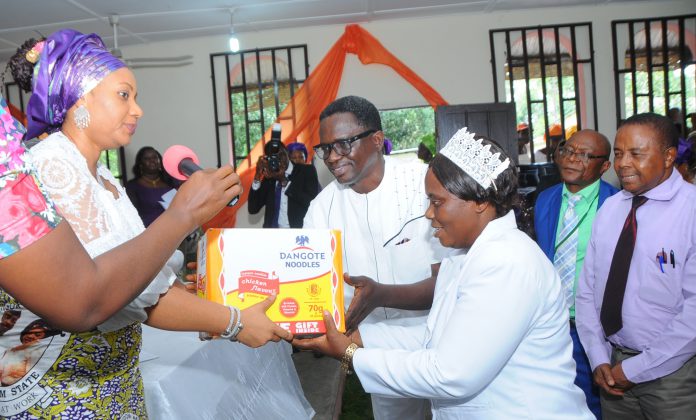 The wife of Akwa Ibom state Governor, Mrs. Martha Udom Emmanuel recently put smiles on the faces of inmates of Qua Iboe Church Leprosy Hospital, Ekpene Obom in Etinan local government area, with a visit to the hospital, where she donated food items and toiletries to inmates.

The Governor’s wife visit to the hospital, which is the first of its kind, since her assumption of office, provided opportunity for her to meet and interact with the inmates as a way of giving them a sense of belonging.

Addressing the people, the first lady assured them that the administration of Governor Udom Emmanuel is committed to improving the living standard of the less privileged through provision of enabling environment and welfare programmes for them. She told the inmates that being physically challenged was not the end of life, as there is always ability in every disability.

An inmate of the hospital Mrs. Offiong Bassey who is the State President of Joint Association of Persons with Disabilities said they would never forget Mrs. Martha Udom Emmanuel for giving them a sense of belonging.

Apart from the Qua Iboe Church Leprosy Hospital, the Governor’s wife also visited inmates of Goodnews Gospel Village in Abak, where she equally donated food items, cash and toiletries for the upkeep of the inmates.

The First Lady advised the children to respect their elders and devote themselves to their studies, in order to succeed in their academic pursuits.

Also speaking, a prominent son of Abak and Commissioner for Information and Communications, Mr. Aniekan Umanah gave kudos to the founder of Goodnews Gospel Village for his sacrifice and commitment to the welfare of the less-privileged.

During the visit, the children sang and danced with the wife of the Governor, in appreciation of her generosity to them.

In the entourage of the First Lady were the wife of the speaker Akwa Ibom House of Assembly, Mrs.